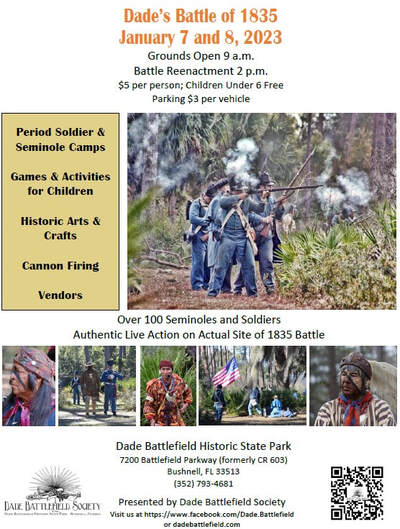 For reenactors/ living historians interested in information about the event, guidelines and application, please go to the "Reenactor" page.
For sutlers, demonstrators, food vendors, and others interested in participating, please email reenactment@dadebattlefield.com

Each year the Dade Battle Reenactment weekend works to demonstrate and educate by recreating the December 28, 1835 Seminole Indian attack on Dade's men who were marching from Fort Brooke (present day Tampa) to Fort King (present day Ocala). Living historians and reenactors bring history to life during this weekend and help pass on this important history to others.

It started on December 28, 1835, when a column of 107 soldiers led by Major Dade were ambushed by the Seminole warriors at the Dade Battle in Sumter County, Florida.

"Have a good heart; our difficulties and dangers are over now, and as soon as we arrive at Fort King you'll have three days to rest and keep Christmas gaily." Major Francis L. Dade spoke these words of encouragement to 107 cold, tired soldiers in a pine forest on the morning of December 28, 1835. Within eight hours, only three soldiers would survive the battle that marked the beginning of the Second Seminole War.

Halpatter Tustenuggee (Alligator, as the white man called him) stated: "We had been preparing for this more than a year... Just as the day was breaking, we moved out of the swamp into the pine-barren. I counted, by direction of Jumper, one hundred and eighty warriors. Upon approaching the road, each man chose his position on the west side... About nine o'clock in the morning the command approached... So soon as all the soldiers were opposite... Jumper gave the whoop, Micanopy fired the first rifle, the signal agreed upon, when every indian arose and fired, which laid upon the ground, dead, more than half the white men. The cannon was discharged several times, but the men who loaded it were shot down as soon as the smoke cleared away... As we were returning to the swamp supposing all were dead, an indian came up and said the white men were building a fort of logs. Jumper and myself, with ten warriors, returned. As we approached, we saw six men behind two logs placed one above another, with the cannon a short distance off... We soon came near, as the balls went over us. They had guns, but no powder, we looked in the boxes afterwards and found they were empty".

Sutlers, Food Vendors, and Others

​Sutlers, Food Vendors, and other organizations or people interested in setting up at the 2023 Dade Battle Weekend, please complete the appropriate form below and return to Dade Battlefield Society for review. Reenactors- please visit our reenactor page for more information. Please email reenactment@dadebattlefield.com with any questions.